Primary effluent is mixed with Return Activated Sludge in the aeration tanks to remove the remaining solids. Using decomposers found in nature (mainly bacteria from soil) and the supplied air bubbles from compressors, the remaining solids are removed by converting them into more bacteria. This process also has a population of bacteria that remove ammonia and some phosphorus to prevent an undesirable condition in the arroyo. Excessive ammonia can be toxic to fish and animals. 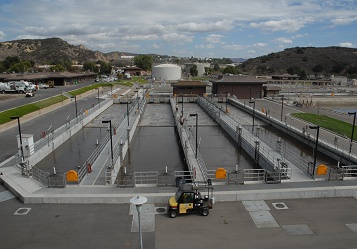